The BioCharger™ enables YOU to proactively improve YOUR health and wellness by harnessing the energy around us and merging it with cutting edge technology. 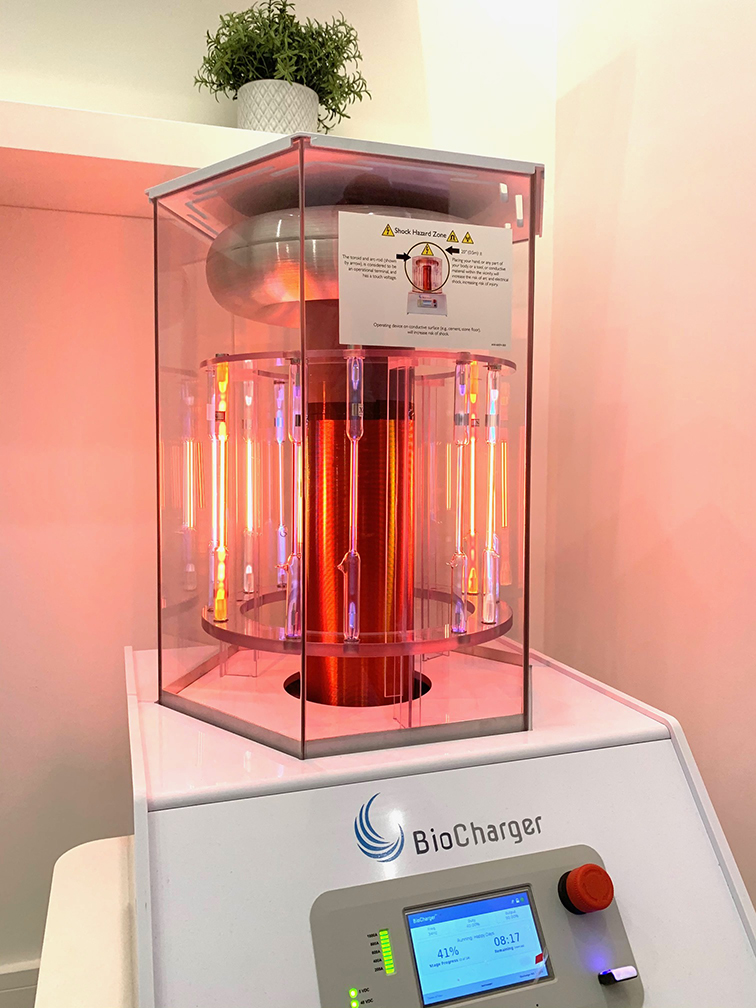 The BioCharger NG utilizes four different energy types – Light, Voltage, Frequencies & Harmonics, and Pulsed Electro-Magnetic Fields (PEMFs).  It is the first energy platform of its kind to incorporate all four of these beneficial energies into one body treatment.

FREQUENCY & HARMONICS
Harmonics & Frequencies found in nature are produced by the 100-lightning-strikes-per-second occurring within our atmosphere.  The energy of these millions of discharges per day are brought indoors using the BioCharger’s Tesla Coil.

LIGHT
Not the light of a lightbulb or the Sun – but naturally occurring element gases vibrating at the speed of light including Argon, Xenon, Krypton, Neon, Helium and Mercury – produce the Light component of the BioCharger. These charged gas particles are most frequently recognized in nature as the Auroras.

To gain the best results, use BioCharger™ for 30 minutes before each workout, 3-5 times a week. We suggest that you set up the BioCharger™ Start your stretching routine and be mindful of the stretches that are still a little sore. Hang on these stretches for an extra 5 count. Also, make sure to leave 2-3 minutes at the end to relax and think about your upcoming work out.

Bio charging to properly align your mind and body

We suggest meditating in front of the BioCharger™ for 30 minutes a day, 3-5 times weekly. We suggest that you set up the BioCharger™ directly on the floor in front of you, 1-3 feet away. To gain the best results, meditate first thing in the morning or after dinner. Make sure to relax your mind and think positive thoughts that connect you to all of the energy around you. This routine can also be done with yoga.

For best results with your health and wellness issues, use BioCharger™ for  30 minutes a day, 3-5 times weekly. Suggested first thing in the morning or before you are about to engage in an activity where you want to be in a peak state. Be sure to relax your mind and think about the situation, issue, or challenge you are experiencing.

Contact Us
Need some wellness guidance?
Let us help guide you to the right solution
Contact Us